On December 22, 2021 the Grand Lake Stakeholders Memorandum of Understanding (MOU) was extended through December 31, 2026. The extension was approved by the Bureau of Reclamation, Northern Water, Grand County BOCC, and Colorado River Water Conservation District. The MOU created an adaptive management process to improve Grand Lake clarity while Reclamation plans and complies with the requirements of the National Environmental Policy Act (NEPA).

For more information see the "Taking Action" section below.

Grand Lake, Colorado's largest and deepest natural lake, is located in the headwaters of the Colorado River in Grand County. A feature of the Colorado-Big Thompson Project (C-BT), Grand Lake is interconnected with Shadow Mountain Reservoir and part of the Three Lakes System that includes Lake Granby.

The 1937 Senate Document 80 broadly describes the C-BT Project and its intended water supply and power generation features. This document states that the Project must be operated in a manner to accomplish five primary purposes. One of those purposes is “to preserve the fishing and recreational facilities and the scenic attractions of Grand Lake, the Colorado River, and the Rocky Mountain National Park.” C-BT Project operations have impacted Grand Lake clarity and Grand County believes that this has affected the lake’s scenic attraction. As a result, Grand County engaged the U.S. Bureau of Reclamation, Northern Water and other stakeholders, to improve water quality conditions and preserve the scenic attractions of Grand Lake.

To that end, Grand County has been working with Reclamation and other stakeholders to improve water quality conditions in Grand Lake. Stakeholders have agreed to utilize water clarity, as measured by Secchi depth, as the primary metric by which scenic attraction can be quantified. A Secchi disk is a circular plate divided into quarters painted alternatively black and white. The distance at which the disk disappears in the water is the Secchi depth. A higher Secchi depth equates to greater clarity. Visual water clarity, the distance at which objects can be seen through water, is typically described by Secchi depth measurements. In 1941, prior to completion of the C-BT project, a single Secchi depth of 9.2 meters (30 feet) was measured in early September in Grand Lake. As you can see from the graph below, clarity has degraded since the C-BT project began. 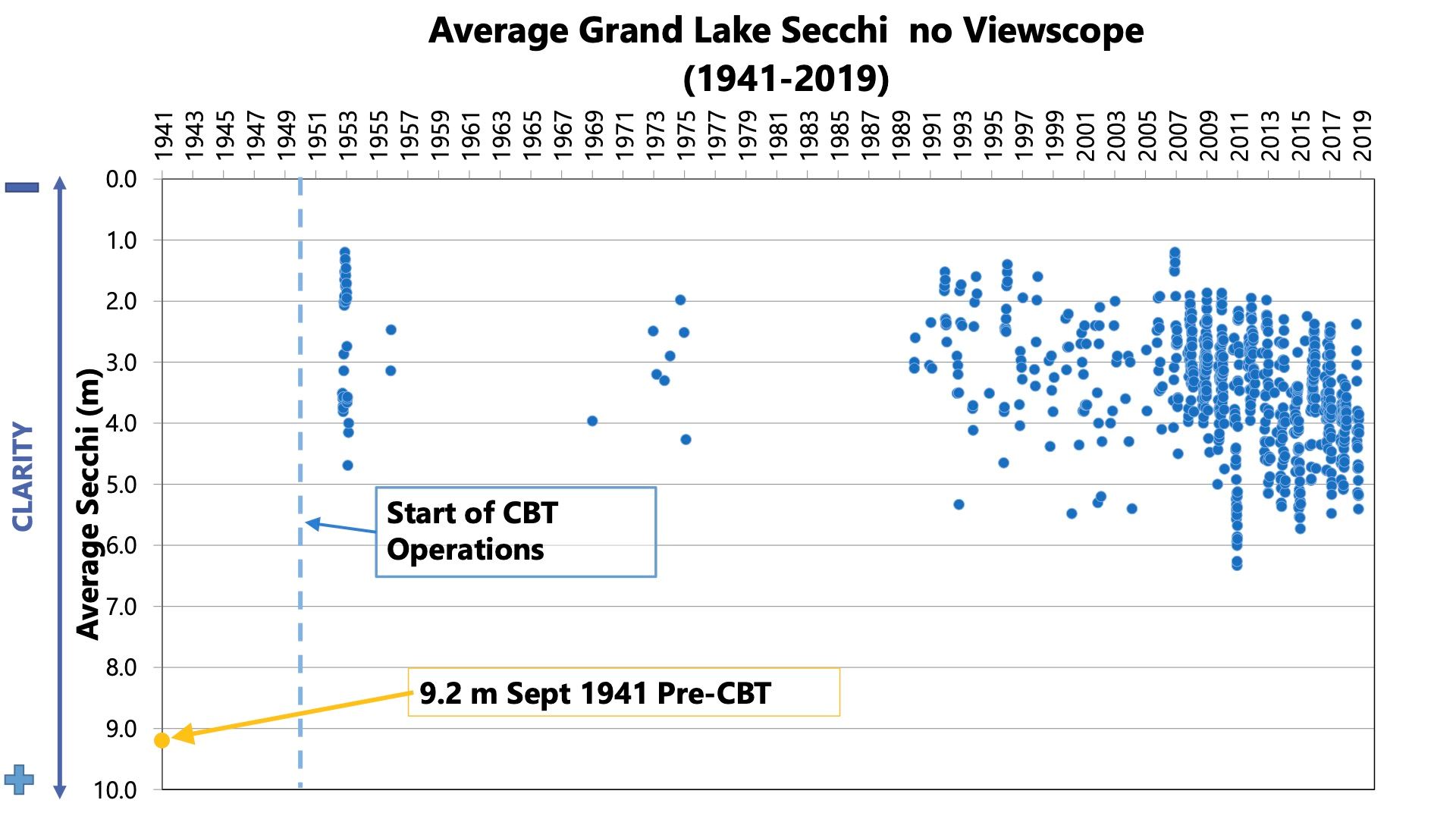 In 2008, to protect the lake Grand County, the town of Grand Lake, and Northwest Colorado Council of Governments sought a site-specific water clarity standard for Grand Lake of 4 meters. While the Colorado Water Quality Control Commission approved the standard, it imposed a deferred implementation date which never went into effect. Instead, a narrative water quality standard was adopted of, “The highest level of clarity attainable, consistent with the exercise of established water rights, the protection of aquatic life, and protection of water quality throughout the Three Lakes system.” (5 CCR 1002-33, Numeric Standards Table, at p. 13 (June 30, 2015)) This continues to be acceptable to the Commission and stakeholders including Grand County only because of the key MOU components, explained below.

In 2016, the Grand Lake Clarity Stakeholders Memorandum of Understanding was created “to establish an adaptive management process while Reclamation conducts a planning and NEPA process to evaluate alternatives to improve clarity in Grand Lake as described in the Clarity Supplement.”  The “MOU may be extended by mutual agreement of Reclamation, Northern Water, and the West Slope until Reclamation issues its decision document upon completion of the NEPA…”. This agreement was extended on December 22, 2021 and it is set to expire on December 31, 2026.

The MOU established water quality “goal qualifiers” that were mutually agreed upon as targets to be achieved through adaptive management during the clarity period of concern, from July 1 to September 11 each year. The goal qualifiers are an average Secchi depth during the clarity period of 3.8 meters, and minimum Secchi depth of 2.5 meters. Since adaptive management began in 2016, C-BT pumping schedules in 2018 and 2019 have led to some quite unanticipated, promising, and positive water quality outcomes.

Grand County believes it was imperative that the Clarity MOU be extended: